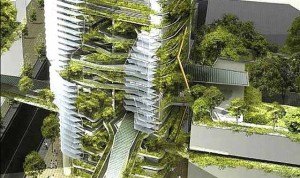 It is forecasted that by 2050, 80 percent of the world’s population will live in urban areas (currently about 60 percent).  The population will have increased to about 9.2 billion, most in developing countries.

Vertical farming in skyscrapers could do more than just solve future food shortages.  They could also avoid global warming, raise living standards in the developing world and alter how to get food and to dispose of waste.  It may sound hard to believe, but vertical farming is actually a real prospect for the future.

How to Grow Strawberries in Hydroponics