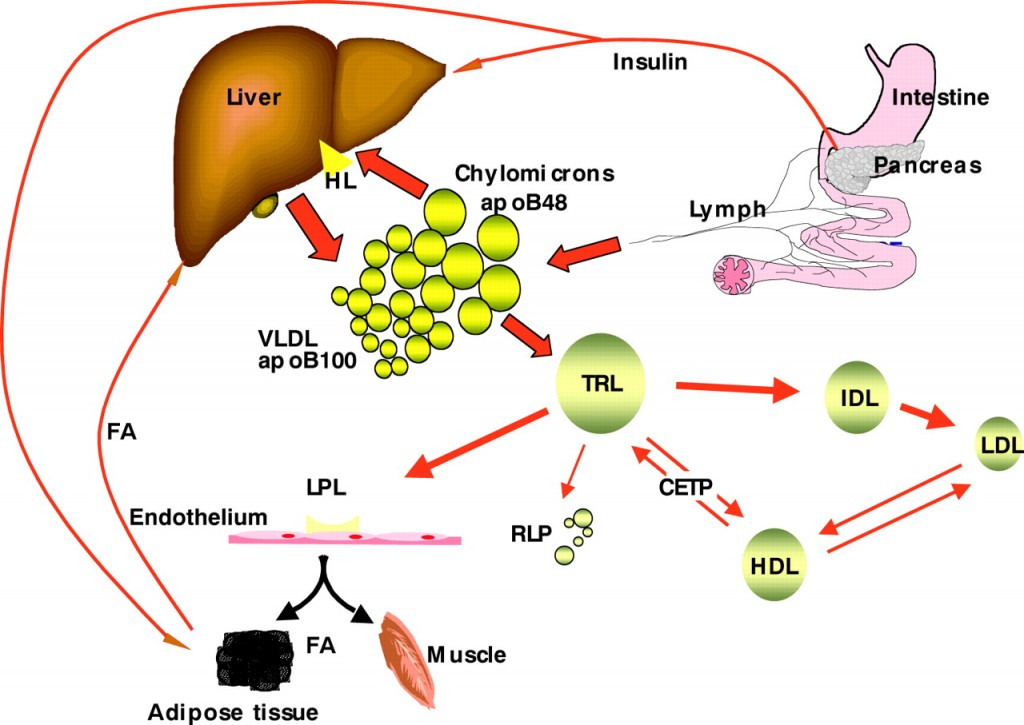 Diagnosis of high triglycerides
– 2 Fasting blood tests for accurate results
– No eating for at least 12 hours before each blood test
(remark: food – particularly fatty food – can temporarily boost triglyceride levels in the blood and skew the test results)

In many cases, high triglycerides and high cholesterol go together.  This condition is sometimes known as combined hyperlipidemia 混合型高脂血症.

Having high triglycerides increases the risk developing type 2 diabetes leading to loss of vision and feeling (especially in feet and fingertips), as well as kidney disease and heart disease.

1) Insulin Resistance
It indicates the system in human body for turning food into energy not working properly.  A common cause of high triglycerides is insulin resistance i.e. the cells not allowing insulin, or its companion glucose to enter, resulting in both glucose and triglycerides built up in blood stream.

If overweight, eating lot of sugary and starchy foods or being lack of exercise, the insulin resistance can become worse.  It is possible to reverse the tracks by following the exercise and meal plan recommended to lower triglycerides.

2) Prediabetes
If glucose levels being high, but not enough to equal diabetes, it could be prediabetes.  In such a case it is approaching to type 2 diabetes.  When suffering prediabetes (or diabetes), it is also likely to have high triglycerides and cholesterol.

Diabetes:
If the blood sugar levels increase to a high enough level, it is diabetes.  If without treating it for long time, high blood sugar levels injure nerves and harm blood vessels, which impairs circulation.  The damage can affect vision, kidneys, and even brain cells.   Beyond this falling problems, diabetes might increase the risk of heart disease, blindness and bladder problems.

To lower triglyceride levels
It is critical for diabetics getting their diabetes under control.  Diabetics must take action reducing the glucose and insulin in blood stream and keeping them at a constant level.  In many cases, this can be helped or even entirely accomplished through exercising and eating a diet low in sugar and saturated fats.

Understanding Triglycerides And Its Level

How To Lower Your Triglycerides With Diet