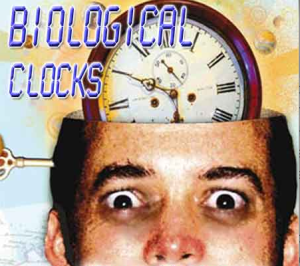 Living organisms developed an internal biological clock, the circadian rhythm 晝夜節律, helping their bodies to adjust to daily cycle of day and night as the Earth rotates every 24 hours.

Daily cycles also adjust the levels of substances in our blood, including blood sugar, gases, red blood cells and ions such as potassium and sodium.  Our internal clocks may even affect our mood, particularly in the form of wintertime depression known as seasonal affective disorder (SAD).

A biological clock consists of three parts: an action to receiving light, temperature, or other input from the environment; the protein and chemicals that constitute the clock; and components assisting the clock to manage the activity of other genes.

In the last few decades, scientists have found the genes that control internal clocks such as:

Clock genes have been discovered in organisms from people to mice, fish, fruit flies, plants, molds and even single-celled cyanobacteria 藍藻.

Location of Body’s Master Clock
The master circadian clock for adjusting 24-hour cycles throughout our bodies is located in a region named the suprachiasmatic nuclei 視交叉上核 (SCN) in the hypothalamus 下丘腦 of the brain.  The SCN is comprised of two tiny clusters of several thousand nerve cells that “tell time” based on external cues, such as light and darkness.  The SCN controls metabolism, sleep and hormone production.

The Number of Hours in Biological Clock
The human circadian rhythm 晝夜節律 is actually 10 to 20 minutes longer than 24 hours.  Other species have 22-28 hours circadian rhythms.  When organisms are kept out from natural light the biological clocks continue to work.  Without daylight, the biological clock will continue running on its own natural cycle.  Immediately when morning light hits the eyes, the clock will synchronize the earth’s 24-hour day.

Also biological clocks perform in longer cycles such as hibernation 冬眠, migrations, and even annual changes in coat and color.  When the animal brain registers longer days in the spring and shorter days in the autumn, it activates hormone secretion influencing these events.

The Working Way of Clock Genes
Clock genes are a group of instructions, coding for clock proteins.  The genes interact with the proteins, producing daily fluctuations in protein levels.  The PER gene is the central player coding for PER protein.  PER levels are lowest early in the day and highest during early evening.

Localization of the FASPS gene near the telomere of chromosome 2q:
A strong candidate gene (hPer2), a human homolog of the period gene in Drosophila, maps to the same locus.  Morning Larks have a serine to glycine mutation 甘氨酸 變異/變種 within the casein kinase Iepsilon (CKIepsilon) binding region of hPER2, which causes hypophosphorylation 低磷酸 by CKIepsilon in vitro.  Thus, a variant in human sleep behavior can attribute to a missense mutation 錯義突變 in a clock component, hPER2, which alters the circadian period.