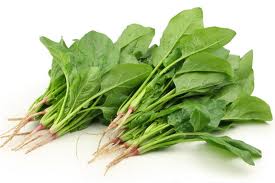 Spinach is believed to be of Persian origin.  By the 12th century, it spread across Europe becoming a desirable leafy green reputable for good health.  Its reputation still stands firm today.  Spinach belongs to the chenopodiaceae family (also known as goosefoot), a family of nutritional powerhouses including beets, chard and quinoa.  It shares a similar taste profile with these two other vegetables; the bitterness of beet greens and the slightly salty flavour of chard.  There are three different kinds of spinach generally available: savoy, semi-savoy and smooth leaf.

1) Anti-Inflammatory and Anti-Cancer Benefits
Researchers have identified more than a dozen different flavonoid compounds in spinach,  functioning as anti-inflammatory and anti-cancer agents.  The technical category of spinach flavonoids are known as methylenedioxyflavonol glucuronides.  Spinach extracts have been shown slowing down cell division in human stomach cancer cells (gastric adenocarcinomas), and in studies on laboratory animals, to reduce skin cancers (skin papillomas).

Lutein and zeaxanthin (both are carotenoids) found in spinach are primary antioxidants in several regions of the eye, including the retina and the macula.

Choose spinach with vibrant deep green leaves and the stems with no signs of yellowing.  Avoid those having a slimy coating which is an indication of decay.

Do not wash spinach before storing as the exposure to water encourages spoilage.  Place spinach in a plastic storage bag and wrap the bag tightly around the spinach, squeezing out as much of the air as possible.  Place the bage in refrigerator where it will keep fresh for up to 5 days.

Spinach should be washed very well since the leaves and stems tend collecting sand and soil. Before washing, trim off the roots and separate the leaves.  Do not leave spinach soaking in the water as the water-soluble nutrients will leach into the water.

Use a large pot (3 quart) with lots of water and bring to a rapid boil.  Add spinach to the boiling water and boil for 1 minute.  Start timing as soon as placing the spinach in the pot.  Remove spinach from pot, press out liquid with a fork, place in a bowl, toss with dressing and top with favorite ingredients.