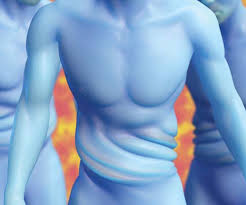 Causes
No single cause has been discovered.  However it is now clear that an ulcer is caused by the imbalance between digestive fluids in the stomach and duodenum.

Following causes are attributed to the formation of ulcer:

2) Use of painkillers called nonsteroidal anti-inflammatory drugs (NSAIDs), such as aspirin, naproxen (Aleve, Anaprox, Naprosyn, and others), ibuprofen (Motrin, Advil, Midol, and others), and many others available by prescription. Even safety-coated aspirin and aspirin in powered form can frequently cause ulcers.

3) Excess acid production from gastrinomas, tumors of the acid producing cells of the stomach that increases acid output (seen in Zollinger-Ellison syndrome).

The Symptoms of an Ulcer
An ulcer may or may not have symptoms. When symptoms occur, they may include:

Symptoms of a Stomach Ulcer

How a peptic ulcer develops