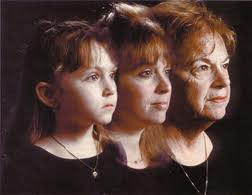 What is Human Ageing
Human Ageing is the physiological changes occuring in human body leading to senescence 衰老/老化, the decline of biological functions and of the ability to adapt to metabolic stress. In humans the physiological developments are normally combined by psychological and behavioural changes, and other changes, involving social and economic factors.

Ageing starts as soon as adulthood reached and is as much a part of human life as are infancy, childhood, and adolescence 青少年. Gerontology (the study of ageing) is concerned primarily with the changes occurring between the attainment of maturity and death.

The ageing process and potential interventions for extending life assumption
老化進程 和 延長壽命的假定 潛在干預措施
Ageing is the accumulation of diverse deleterious changes occurring in cells and tissues with advancing age. Those changes are responsible for the increased risk of disease and death. Studies on animal models have been demonstrated that ageing rates and life expectancy can be modified.

Our Ageing Speed
Some research has found not all parts of human body ageing at the same rate.  Most tissues age at same pace; in effect, their biological age (in good functioning time) matches their chronological age (number of calendar years).

However it was found woman breast tissue was an exception.  Healthy breast tissue ages more rapidly, in effect two or three years older than the rest part of a woman body.  This may explain why breast cancer is the most common cancer in women.  Since age is a risk factor, more rapidly-aging tissue could therefore be more susceptible to cancer.

How to Stay Younger