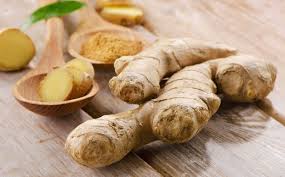 The examples of scientific studies on ginger and its current or potential uses in medical treatment as follows:-

3)
Ginger Reduces Chemotherapy Nausea, Study
Taking ginger supplements with standard anti-vomiting drugs beforehand can reduce the nausea that often accompanies chemotherapy treatment by 40 per cent according to a new US study.

4)
Ginger Kills Ovarian Cancer Cells
Researchers from the University of Michigan Comprehensive Cancer Center have found that ginger not only kills cancer cells, it also prevents them from building up resistance to cancer treatment. Ginger is already used as an effective remedy for nausea and inflammation.

5)
Ginger Compounds May Be Effective in Treating Asthma Symptoms
Gourmands and foodies everywhere have long recognized ginger as a great way to add a little peppery zing to both sweet and savory dishes; now, a study from researchers at Columbia University shows purified components of the spicy root also may have properties that help asthma patients breathe more easily.

6)
Hepatoprotective, Antioxidant, and Ameliorative Effects of Ginger (Zingiber officinale Roscoe) and Vitamin E in Acetaminophen Treated Rats
Ginger is a remedy known to possess a number of pharmacological properties. This study investigated efficacy of ginger pretreatment in alleviating acetaminophen-induced acute hepatotoxicity in rats.
For Detail

7)
Does ginger supplementation lower blood pressure? A systematic review and meta-analysis of clinical trials.
The aim of the present systematic review and meta-analysis was to determine the efficacy of ginger supplementation on blood pressure (BP). PubMed, Scopus, ISI Web of Science, Cochrane Library, and Google Scholar were comprehensively searched until September 2018.

8)
Ginger – as Effective as NSAIDs for Menstrual Pain
For some women menstrual periods are no different from any other days: they go to work hit the gym run errands and bounce through their days with as much energy and vitality as at any other time

9)
Comparison Between the Efficacy of Ginger and Sumatriptan in the Ablative Treatment of the Common Migraine
Frequency and torment caused by migraines direct patients toward a variety of remedies. Few studies to date have proposed ginger derivates for migraine relief.

Side effects of consuming ginger are rare, but may include:

How to eat Fresh Ginger

1)
In hot tea – cut a hunk of fresh ginger (no need to peel) and pour a lot of boiling water over it.  Add little honey and lemon.

4)
In stir-fries – Almost every stir-fry could use a little grated or even minced ginger to spice.

The Health Benefits of Ginger