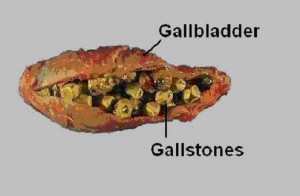 Most people never pay attention to the health of gallbladder, the pear-shaped organ.  Its important job is to collect and store bile which is in fluid form, helping to digest fats.  But unlike the heart, kidneys or liver, the gallbladder is not a organ necessary keeping our body healthy and functioning.  Even when it is NOT functioning properly and with gallstones developed, most people are unaware a problem started.

The Function of Gallbladder in Digestion
The gallbladder plays a part in food digestion.  It stores and releases bile into the small intestine when food is eaten.  The gallbladder contains bile salts (including other substances) for breaking down fat.  The bile duct, through where bile is released from, can become obstructed by gallstones causing symptoms such as pain, bloating, nausea and vomiting.  The stone may become an obstacle creating difficulty for the bile to be released from the bile duct.

Most people having gallstones never develop symptoms.  Once symptoms started, it needs having the gallbladder removed.

Gallstones are common but without symptoms in people who have them.  Occasionally they have problems such as pain, jaundice, pancreatitis, and gallbladder inflammation.

Gallstones occur when bile forms stones in the gallbladder.  In most cases, gallstones contain lumps of fatty (cholesterol-like) material, solidified and hardened.  Sometimes bile pigments or calcium deposits will form gallstones.  Occasionally just a few small stones are developed; or occasionally a great many.  Sometimes just one large stone is formed.

About one in six males and one in three females form gallstones at some stage in their lives.  Gallstones develop into more common with older age.

The risk of forming gallstones increases with:

Being vegetarian and moderate drinking of alcohol may reduce the risk of forming gallstones.

The most common symptom of gallstones is biliary colic.  Biliary colic is a very specific type of pain, occurring as the primary or only symptom in 80% of people with gallstones who develop symptoms.

The complications of gallstones are;

Sludge and Gallstones
Sludge is an abnormality of bile discovered with ultrasonography of the gallbladder.  Specifically, the bile within the gallbladder consists of two different densities with the denser bile at the bottom.  The bile is denser because containing microscopic particles, usually cholesterol or pigment, embedded in mucus 粘液.  Continuing for a long period of time, sludge may remain in the gallbladder, or it may disappear and not return, or it may come and go.  These particles may be prodromes of gallstones, frequently occurring in some situations in which gallstones frequently develop, such as pregnancy, rapid weight loss and prolonged fasting.

Most gallstones are silent
If silent gallstones are discovered in a person at age 65 or older, the chance of developing symptoms from the gallstones is only 20% or less assuming a life span of 75 years.  In this instance, it is reasonable not to have treatment.

For a younger person, no treatment also may be appropriate if the peron having serious, life-threatening diseases, e.g. serious heart disease, that are likely to shorten their life span.

2) Sphincterotomy and extraction of gallstones