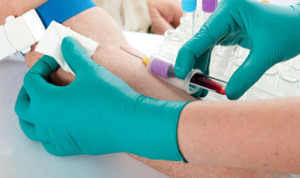 It is used testing for diabetes as well as testing the effectiveness of different medication or dietary changes on patients already diagnosed as diabetic. After fasting, a carbohydrate metabolism test is conducted to measure blood glucose levels.

On fasting the hormone glucagon is stimulated resulting in increasing the plasma glucose levels in human body. If a patient doesn’t have diabetes, the body will produce insulin to rebalance the increased glucose levels.

However patients with diabetes either don’t produce enough insulin to rebalance their blood sugar (typically in type 1 diabetes) or their body unable using the insulin effectively enough (typical of type 2 diabetes).

Consequently when blood glucose levels are tested, patients with diabetes will have blood sugar levels significantly higher than patients without diabetes.

Blood sugar levels refer to the amount of glucose in the blood (the serum glucose level).  Practically, this amount is stated in millimoles per litre (mmol/l) and stay stable amongst people without diabetes at around 4-8mmol/L.

Spikes in blood sugar will occur following meals, and levels will usually be at their lowest in the early mornings.  For people with diabetes, the blood sugar fluctuates more widely

Points to be observed

Fasting test results
The results of a fasting test with respect to glucose levels in the body are as follows: