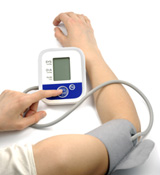 People with an arm-to-arm difference of 15 points or more are twice as likely having peripheral artery disease – essentially cholesterol-clogged arteries in the arms, legs, or other non-heart parts of the body.

Cause
Blood pressure readings in the right and left arms that differ by a few points aren’t anything to worry about.  It’s actually quite normal.  A difference of more than 10 points, though, could suggest trouble.

Younger people – side-to-side differences in blood pressure can occur when a muscle or something else compresses an artery supplying the arm, or by a structural problem that prevents smooth blood flow through an artery.

Older people – usually due to a blockage from atherosclerosis, the artery-clogging disease process at the root of most heart attacks, strokes, peripheral artery disease, and other cardiovascular conditions.

Less common cause – aortic dissection 主動脈夾層動脈瘤.  This is a tear inside the wall of the aorta, the main pipeline of oxygenated blood from the heart to the body.

If the blood pressure readings are more than 10 or 15 points in difference, mention it to doctor at next doctor visit.

Small differences in blood pressure readings between the right and left arm are normal.  But large ones suggest the presence of artery-clogging plaque in the vessel that supplies blood to the arm with higher blood pressure.  Such plaque is a signal of peripheral artery disease (cholesterol-clogged arteries anywhere in the body other than the heart).  When peripheral artery disease is present, there’s a good chance the arteries in the heart and brain are also clogged, boosting the odds of having a heart attack or stroke ……..

A large difference in blood pressure measurement between arms could be a signal of following health problems:

Daily Pattern of Blood Pressure
– normally lower at night while sleeping
– starts rising a few hours before wake up
– continues rising during the day with peak in the middle of afternoon.
– begins dropping again in late afternoon and evening

Blood Pressure vs Weather Changes
Generally blood pressure is higher in the winter and lower in the summer.  Low temperature causes blood vessels to narrow resulting in more pressure being needed to force blood through the narrowed veins and arteries.

Additional to cold weather, blood pressure may also be influenced by abrupt change in weather patterns, e.g. a weather front or a storm.  Blood vessels may also react to abrupt changes in atmospheric pressure, humidity, cloud cover or wind in much the same way as its reaction to cold weather.  These weather-related variations in blood pressure are more common in eldery, age 65 and older.

Differences of more than 10 mm Hg in indirect bilateral blood pressure recordings are frequent in normotensive individuals and probably do not per se indicate any abnormal pathology.  In the right clinical situation, differences that are noted should probably be repeated and should be added to the total clinical picture when used to determine whether a pathologic condition is present…….

CBS This Morning – Check blood pressure in both arms

Check blood pressure in both arms, sitting and standing

Different Blood Pressure in Both Arms Linked to Heart Disease